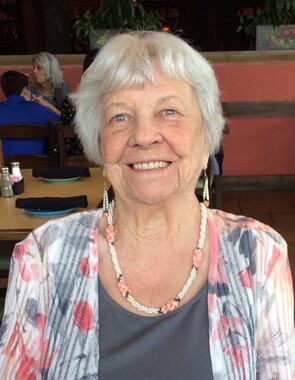 Back to Elizabeth's story

Elizabeth Louise "Lou" Miller, 94, of Claremore, Oklahoma passed away in the comfort of her home on Monday, January 13, 2020.
"Lou" was born on August 7, 1925 in Topeka, Kansas to parents Lawrence Curtis Martin and Leona Evelyn (Mark) Martin. She gradated from Emporia High School and in April of 1944 she married the love of her life, Donald Eugene Miller and became a homemaker.
"Lou" enjoyed getting dirt on her hands whether it was in her flower bed or her vegetable garden. She was also an accomplished Tole Painter; given she had every board in her kitchen painted with some type of fruit. She also painted with acrylics - she just loved to "create". You could often find her hand stitching: knitting, crocheting, cross-stitching, embroidering, etc. "Lou" liked to keep her hands busy! She and her mother shared a love for ceramics; they would create molds, paint, and then fire the final product together. Quite often you could also find "Lou" playing bingo, as it was the highlight of her day, plus she had a real knack for winning! One of "Lou's" most special occasions was flying to Escondido, California with her daughters to celebrate her brother's 90th birthday in 2008. Although "Lou" enjoyed many things, her most treasured times were being with her family.
"Lou" is preceded in death by her husband, Don E. Miller, in 1985; parents, Lawrence and Leona "Nonie" Martin; sister, Doreen Martin; brother, Virgil and his wife Gennie Martin; sister-in-law, Betty Jo Hogan and brother-in-law, Dale Hogan, brother-in-law Kenneth Miller and sister-in-law Phyllis Miller; and grandson, Jason Stanfill. Also, her beloved little dog, Tina, who was always by her side.
"Lou" is survived by her daughters, Karen Ware (Bob Pomeroy) and Linda Reddout (David) ; sons, Rick Miller (Dianna) and Mike Miller (Vickey); thirteen grandchildren; ten great grandchildren; and numerous nieces and nephews.
In lieu of flowers, donations can be made in her honor to the ASPCA at www.aspca.org
A Private Memorial service will be held at Memorial Park Cemetery Mausoleum on Monday, January 20, 2020 at 2:00pm.
Friends who wish may sign the online guestbook at www.stumpff.org
Published on January 21, 2020
To plant a tree in memory of Elizabeth Louise Miller, please visit Tribute Store.

Plant a tree in memory
of Elizabeth

A place to share condolences and memories.
The guestbook expires on April 20, 2020.