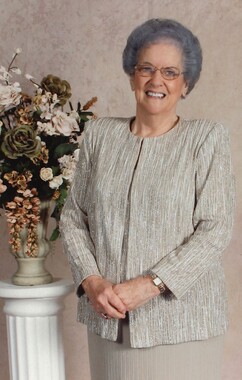 Back to Katherine's story

Katherine June Dorsey was born February 17, 1933 to William Jacob and Ruby (Hamil) Hight near Sallisaw, Oklahoma. She was one of nine children. June grew up in the Sallisaw area and attended school there.
At the time she was saved, June didn't understand that God had a plan for her life, but about three years later He revealed His plan when she met a young man and fell in love.
June and Arnold E. (Jody) Dorsey were married on January 16, 1951 and Jody became "the dearest husband God ever made." The happy couple moved to Verdigris, Oklahoma where they spent all their married life in the same home. They devoted their lives to raising three sons, working in their church - Verdigris Assembly of God - and spending time with loving family and friends. They always kept God first.
When they were newlyweds, the couple went to their pastor and asked if they could take care of the church. It was their way of serving God at the time. For several years they were the church janitors, and even though they received no financial compensation, they served with joy.
June was a gifted cook and seamstress. She loved to entertain family, friends and sometimes strangers in her home. She always felt that cooking was a way to extend her hand to anyone that needed a little extra kindness or love. It was her special ministry. Without exception, everyone who had the privilege of enjoying a meal or dessert from June's kitchen, agree that it was more than delicious!
In addition to her homemaking and entertaining, June led the Women's Ministries at Verdigris Assembly for 22 years. She also taught Sunday School for many years. Anything her hands could do, she was willing.
June lived with sickness and pain the last few years of her life, but she is well and healthy and pain free today! She passed from this life into the arms of Jesus on Monday, February 10, 2020 at Sequoyah Manor Nursing Home in Sallisaw, Oklahoma.
June is preceded in death by her beloved husband Jody; her eldest son: Randy; sisters: Louise (Hight) Berg, Marcella (Hight) Knight; brothers: Robert Hight, Byron Hight, Ben Hight.
She is survived by sons: Terry Dorsey and wife Lorraine, Brad Dorsey and wife Linda; Daughter-in-Law: Carolyn Dorsey; granddaughters: Cary (Dorsey) Bohm and husband Tyler, Lara Dorsey, Kristen Thiessen, Aurora Thiessen, Courtney Watson; grandsons: Dr. Kip Dorsey and wife Amy, Dr. Ky Dorsey and wife Karen, Craig Thiessen and wife Carolyn, Joel Thiessen, Quentin Dorsey and wife Emily, Colin Dorsey, Aaron Watson and wife Samantha; great-grandchildren: Elliott Bohm, Hattie Bohm, Jack Dorsey, Evie Dorsey, Natalie Thiessen, Zachary Thiessen, Cora June Dorsey, Dallas Watson, Aidan Goodner; Sister: Mary Lou Thompson and husband Clem; brother: Jim Hight and wife Mary, along with numerous nieces and nephews, and a host of precious friends and family
Published on February 13, 2020
To send flowers to the family of Katherine Dorsey, please visit Tribute Store.

Send flowers
in memory of Katherine

A place to share condolences and memories.
The guestbook expires on May 13, 2020.