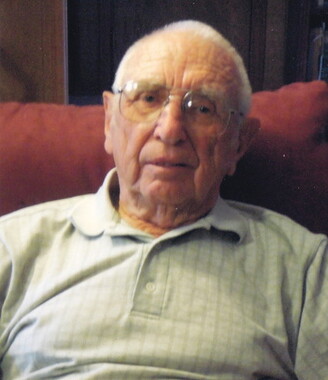 Back to Lloyd's story

He graduated from Verdigris High School in 1942. He was drafted into the U.S. Army and served in Company C 313 79th Infantry Division. He provided rations and supplies to the front lines in France, Belgium, Holland, Germany, Czechoslovakia as a jeep and truck driver. His company got down to 30 people, twice.

He attended Oklahoma State Technical School in Okmulgee, Oklahoma and graduated as a draftsman.

He met his wife, Wilma Jean Marlar, of 58 years, after he left the Army. He became a federal employee, working at the Southwestern Power Administration in Tulsa, and later retired. After he was widowed, he married Oleta Clarke September 2001, at the Lifechanger Church in Claremore.
He was an avid and passionate golfer, who made 5 hole in ones, the last when he was 90. He played at Heritage Hills in Claremore, Mohawk Municiple Golf Course in Tulsa, and Gordon's Golf Course in Verdigris.

He is preceded in death by his parents: Clarence and Ada (Poynor) Gilbert; his first wife and mother of his children: Wilma Jean (Marlar) Gilbert; and siblings: Calvin Gilbert, Philistine Evans, and Velma Lee West.

A viewing and visitation will be held on Thursday, February 06, 2020, in Claremore, Oklahoma, at the Rice Funeral Home, 631 East Will Rogers Blvd, from 3:00 pm to 7:00 pm. The funeral service will be held at the Life Changer Church, located at 2221 West 21st Street North, Claremore, Oklahoma, Friday, February 7th, 2020, at 10:00 am. Military honors will be held at Oakhaven Memorial Gardens immediately following the service.
Published on February 5, 2020
To send flowers to the family of Lloyd Gilbert, please visit Tribute Store.

Send flowers
in memory of Lloyd

A place to share condolences and memories.
The guestbook expires on May 05, 2020.

Gilda Gilbert , wife of Lloyd Gilbert, Jr. we
My wonderful father in law, Lloyd Gilbert Sr., was in my life for 39 years. For each of those years, I was astonished by his kindness, generosity, creativity and loving personality. He is in my heart and will be missed each and every day. With loving memories, Gilda
View all