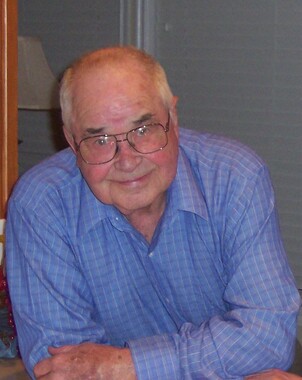 Back to William's story

Graveside service for Amos Cooper will be 10:00 a.m., Tuesday, January 14, 2010 at Memorial Park Cemetery. A memorial service is set for 12:00 p.m., at MMS-Payne Funeral Home Chapel. Friends may visit at the funeral home on Monday, January 13 from 1pm-8pm, with family receiving visitors from 5pm-7pm.
William "Amos" Cooper passed away on January 7, 2020. He was 90 years old.
Amos was born on November 8, 1929, in Tulsa, Oklahoma to William Henry Cooper and Velma Grady (Mozingo) Cooper. He attended Lowell Elementary School in Tulsa before the family moved to Arkansas. Amos grew up on the family farm and eventually graduated from Plumerville High School in 1948. Since then he loved going to the annual homecomings which he attended for many years.
Amos' working career began at Crews Lumber Company in downtown Tulsa transporting lumber for construction of the original Admiral Twin Drive-in Theater. He became a skilled tool and cutter grinder while working at Douglas Aircraft in the early fifties. Over the years he worked for Custom Cutter, Toolco (which he co-owned), then started and operated Sawco, as well as Cooper Small Engine Repair. He later worked for T.D. Williamson and retired from McDonnell-Douglas (now Boeing) in 1992. He was very innovative and was often recognized for his ideas and his approach to problem solving. He could fix anything that was broken and did so for all in need. He joined the Masonic Lodge in 1957.
The oldest of four boys, he was kind hearted, a man of high character and had a jovial spirit. Everyone knew him as a sweet and mild-mannered man. A veracious reader, he loved reading about the old west and watching westerns.
Amos married Lenora Maxine (Hipp) Cooper on June 19, 1950 in Tulsa. Here they raised their two boys - William A. Cooper, Jr., and Terry L. Cooper. In 1978 they moved to Claremore where they found good neighbors and a great, refreshing country lifestyle. They celebrated their 69th anniversary this past year enjoying all the years with family and friends.
Amos Is preceded in death by his parents; son: Terry L. Cooper; grandson Thomas A. Cooper; and two Brothers Gary E. Cooper and H. Wayne Cooper.
Survivors include his wife Lenora M. Cooper; son William A. Cooper Jr of the home; Daughter-in-law Cheryl Cooper; Grandsons Nick Cooper (wife Jackie) and Adam Cooper (wife Amanda); Great- grandchildren AJ, JP & Reagan Cooper; as well as his brother Dean. E. Cooper, along with many other family members and friends.
In lieu of flowers please make donations to Operation Aware. www.operationaware.org
Published on January 10, 2020
To send flowers to the family of William Cooper, please visit Tribute Store.

Send flowers
in memory of William

A place to share condolences and memories.
The guestbook expires on April 09, 2020.